Reconciling higher freshwater demands with finite freshwater resources remains one of the great policy dilemmas. Given that crop irrigation constitutes 70% of global water extractions, which contributes up to 40% of globally available calories (1), governments often support increases in irrigation efficiency (IE), promoting advanced technologies to improve the “crop per drop.” This provides private benefits to irrigators and is justified, in part, on the premise that increases in IE “save” water for reallocation to other sectors, including cities and the environment. Yet substantial scientific evidence (2) has long shown that increased IE rarely delivers the presumed public-good benefits of increased water availability. Decision-makers typically have not known or understood the importance of basin-scale water accounting or of the behavioral responses of irrigators to subsidies to increase IE. We show that to mitigate global water scarcity, increases in IE must be accompanied by robust water accounting and measurements, a cap on extractions, an assessment of uncertainties, the valuation of trade-offs, and a better understanding of the incentives and behavior of irrigators.

Field IE is the ratio of the volume of all irrigation water beneficially used on a farmer's field [predominantly, evapotranspiration (ET) by crops and salt removal to maintain soil productivity] to the total volume of irrigation water applied (adjusted for changes in water stored for irrigation in the soil) (2). Annually, governments spend billions of dollars subsidizing advanced irrigation technologies, such as sprinklers or drip systems (3). Sometimes their goal is to increase IE on the understanding that this will allow water to be reallocated from irrigation to cities (4), industry, or the environment, while maintaining or even increasing agricultural production.

Advanced irrigation technologies that increase IE may even increase on-farm water consumption, groundwater extractions (6), and water consumption per hectare (5). At a farm scale, this can arise from a switch to more water-intensive crops and, with the same crop, may occur when there is a strong marginal yield response from additional water. Moreover, the absence of an increase in water consumption per hectare because of a higher IE does not necessarily mean that the water potentially available for reallocation and reuse (see supplementary materials) at a watershed or basin scale increases. Subsidies for drip irrigation may reduce the water applied per hectare and increase water extractions because a higher IE can induce increases in the irrigated area, as shown for the Lower Rio Grande, New Mexico (7).

Although the hydrology related to IE has been known for decades, it is often overlooked or ignored. For example, the United Nations (UN) High-Level Panel on Water, comprising 11 sitting heads of state or government, recommends “…incentives for water users, including irrigators, to use water efficiently” (8) but fails to explicitly recognize that this may increase, rather than decrease, water consumption. Similar to IE, there is also confusion in policy circles about the effects of an increase in efficiency or water productivity (the biophysical or monetary output per volume of water inputs) on basin-scale water availability (see supplementary materials). The UN Sustainable Development Goal (SDG) 6.4, for instance, seeks to increase water use efficiency, but this does not necessarily mean reduced water extractions.

There are reasons why this evidence may be overlooked by policy-makers: Evidence resides in a specialized literature; subsidies for IE can promote rent-seeking behavior by beneficiaries who lobby to continue subsidies; and comprehensive water accounting from the scale of the field to that of the watershed or basin is necessary but frequently absent. Such accounting quantifies field water applications; ET by crops and weeds; evaporation from soil and water surfaces; and, particularly, surface and subsurface water flows returned to the environment or utilized elsewhere at the watershed or basin scale.

Responding to the Paradox

We respond to the paradox (2, 9) with two key insights and a research and policy agenda to deliver on SDG 6 (“ensure availability and sustainable management of water and sanitation for all”). First, irrigation systems are frequently managed to maximize irrigated crop production. This provides benefits but means more water is transpired locally and lost for other uses. Second, locally extracted, but not consumed, water flows to surface supplies and groundwater. Such volumes, perceived as losses to farmers and the irrigation system, do not disappear. They frequently have value and are typically recovered and reused elsewhere in a watershed or basin.

The figure visualizes the paradox within a watershed, showing three types of irrigation with different IEs: drip, sprinkler, and surface. Inflows are precipitation and interbasin transfers. Outflows are (i) beneficial water consumption from transpiration by crops; (ii) nonbeneficial water consumption through transpiration by weeds and evaporation from wet soil, foliage, and open water surfaces; (iii) locally recoverable return flows to surface water systems, from drains and surface runoff, and also to aquifers via subsurface recharge; and (iv) nonrecoverable flows to sinks, such as to saline groundwater and the ocean. Inflows less outflows over a given time period equals the change in water storage.

Studies in several locations confirm the effects of higher IE, including (i) Rajasthan, India, where subsidies for drip irrigation improved farm incomes but also increased the irrigated area and total volume of water applied by farmers (10); (ii) Snake River, Idaho, where farmers have increased their IE, but this has reduced groundwater recharge and led to a decline in the Eastern Snake Plain Aquifer by about 30% since the mid-1970s, despite increased precipitation (11); (iii) the Rio Grande in the United States, where subsidies for drip irrigation increase crop yields and irrigators' net income but can reduce downstream flows and the water potentially available for other purposes (7); and (iv) the Souss and Tensift Basins of Morocco, where the adoption of drip irrigation, supported by subsidies, reduced recoverable return flows, principally to overexploited aquifers. This led to increased water consumption and exacerbated groundwater overexploitation in Morocco because of crop intensification, especially denser tree plantations; increased irrigated area owing to improved control of water; and a greater area of crops with higher water-use requirements (12).

These four cases, and others (5), show that increases in IE are typically associated with a reduction in recoverable return flows and an increase in crop yields and in crop transpiration. Contrary to the policy intent, however, a higher IE is not usually associated with a decline in water consumption. Only when a commensurate decrease in some combination of nonbeneficial water consumption and nonrecoverable flows is observed is it possible to reallocate water to other uses at a watershed or basin scale after an increase in IE (see supplementary materials).

Scientific understanding of the paradox highlights the importance of a comprehensive evaluation of the public costs of subsidizing increases in IE. This, in turn, requires that the estimated benefits (such as higher yields and farm net incomes) be compared to the external costs from induced reductions in recoverable return flows (such as groundwater degradation, losses to aquatic ecosystems, reduced environmental water volumes, removal of salts from watersheds and basins, and other water uses).

If increases in IE are to mitigate the global water crisis, then decisive actions, some of which have previously been highlighted (3, 5, 7, 9), are required. A key constraint to better decision-making is inadequate estimates of water inflows and outflows at watershed and basin scales. This analysis of water accounts is essential to demonstrate when IE policies are or are not in the public interest. Furthermore, successful integration of science into policy and practice requires several preconditions. To avoid “regulatory capture,” there must be transparent and independent auditing of policy processes and data provision. There also needs to be public interest in the issue such that there is a cost to policy-makers who fail to act for the public good. And alignment of public interest–seeking actors, supported by transparent data and evidence, mitigates water misuse and misallocation.

We outline five steps, centered on water accounting and research advances, that promote more effective policy actions. First, physical water accounts need to be developed from the farm-scale to the basin scale to make transparent “who gets what and where” to support decision-making in the public interest. This requires measurement or estimation of all inflows, water consumption, recoverable return flows, and nonrecoverable flows to sinks. Although a priority by the UN High-Level Panel on Water (13), robust and transparent water accounting is the exception. In some jurisdictions—such as Spain (9), Morocco (12), and the Murray-Darling Basin, Australia (14)—several billion U.S. dollars have been spent subsidizing IE, including canal lining and drip irrigation, without proper accounting of their effects on recoverable return flows, aquifers, and river ecology. Developments in remote sensing offer the possibility of estimates of water inflows and outflows at a much lower cost and a greater scale than previously available. 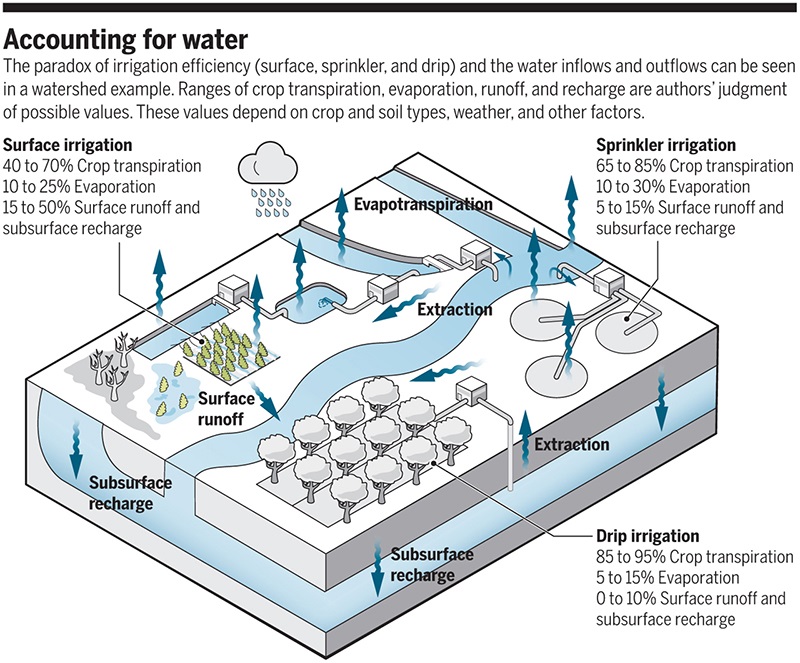 Second, reductions in water consumption are achievable by decreases in water extractions through a direct cap on water offtakes (9) or on the irrigated area. The need for such caps when promoting IE has been identified in the European Union and the western United States, where water rights have been denominated as net extractions that require the calculation of return flows. Water accounting in California, which includes ET, is providing decision-makers with the information needed to determine how much to reduce water consumption to ensure sustainable extractions. By contrast, in Australia, where water rights are denominated in gross extractions, actions to reduce extractions to reallocate water to the environment have, to date, been neither sufficient nor cost-effective (14). To meet environmental flow goals, incentives may be used to make irrigators account for return flows, such as water charges on the reductions in recoverable flows, or financial benefits to maintain such flows by reducing consumption. Incentive-based water reallocations, however, can be constrained by the funding needed to compensate users to facilitate transfers across competing water uses.

Third, to ensure desired outcomes are delivered, risk assessments are needed when evaluating the effects of increased IE, as are accurate measurements from on-the-ground monitoring of flows. Policy-makers must account for uncertainties in key water parameters when calculating water flows (15). Advances in decision-making under uncertainty, better data quality and quantity, user-friendly software, and increased computing power all facilitate greater consideration of risks in future water planning.

Fourth, although understanding water inflows and outflows is necessary, the payoff from subsidizing IE depends on whether the benefits exceed the costs, including those associated with reduced return flows. Comprehensive methods of valuation can make these trade-offs more explicit, as can advances in water accounting and measurements of changes in water quality.

Finally, the effects of policy actions (5) on the behavior of irrigators must be evaluated. Neither IE nor water extractions are constant: They vary by irrigator and differ by land and soil characteristics, crops grown, time of year, and weather conditions. Differences are more readily understood with developments in behavioral and experimental economics and by testing how irrigators' actions change as IE increases. Such methods identify incentives for irrigators to maintain agricultural production with less water extracted.

Overcoming misunderstandings about the paradox of IE is required if SDG 6 is to be achieved. Our five-step reform of the current IE policy agenda—centered on water accounting and reductions in irrigation water extractions which are informed by advances in water valuation, risk assessment, and behavioral economics—offers a pathway to improved global water security.

This is an article distributed under the terms of the Science Journals Default License.